"Can you make a puppet's nose bleed?" 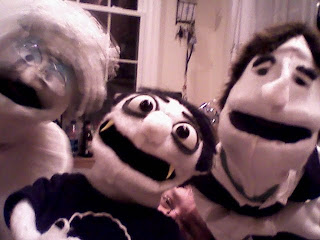 Last weekend we shot some more "Steve The Vampire" shorts!
Here's Mom (Jim Williams), Steve (me!), and Han (Christoper A. Lemanski) on the set... And Jim's eye peeking through just to creep you out!

As a puppeteer and puppet maker I get asked some strange questions sometimes, usually funny.. . Or while working I tend to say and hear weird things that said anywhere else would just be wrong. In funny ways...

Ricardo (who directed Betty And Me and Plinksgiving) once asked:
"Can you make a puppet's nose bleed?"
My wise ass response:
"If you punch it hard enough."

Brie's sister Maggie asked while watching The Muppets last Christmas:
"What happens if you put a puppet in water?"
My wise ass responce:
"It gets wet."

Here are a couple of my faves from working with puppets...

"If I put my hand all the way in here, she'll pop."
- This came from Jim putting on a puppet that was very tight, and he could have popped a seam in her neck.

Anyway... December 1 the next Puppet A Day goes up, another one from the collection. I'll start posting Elmwood Puppets again at the start of the New Year...
Have a great one!

Posted by Jon From Elmwood at 9:49 AM No comments:

I Am A Genius! 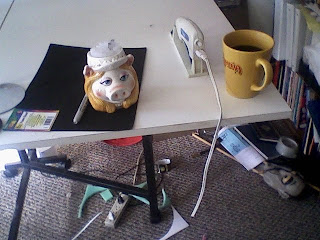 A few months ago I was getting ready to work on some things and I layed out some antron fleece to cut, and I folded it over a could times to do one cut instead of several. While cutting it I hit a part that took a little extra pushing with the scissors. Then a little while later I plugged in the power strip to get the glue gun warmed up... And it wouldn't... Hmm, I wonder why...
I will admit, this wasn't one of my brightest moments!
Hahaha
Posted by Jon From Elmwood at 12:01 AM No comments: 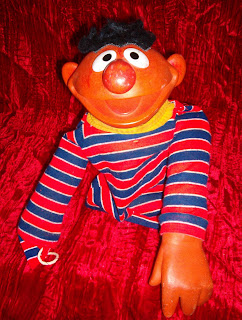 Ernie
He lost a hand! 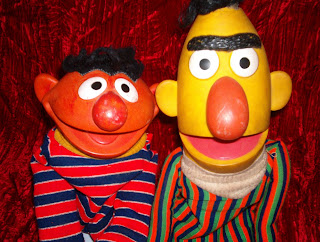 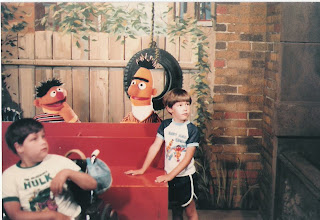 Me and my brother in Sesame Place, very early 1980's

Over on the Elmwood Productions Blog we're taking some time to pay tribute to 40 Years of Sesame Street by sharing our memories of our favorite moments of Sesame Street and it's citizens and the effect the show has had on us, check it out! 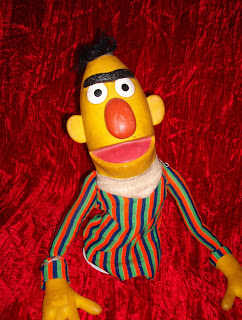 Bert
One of my oldest toys 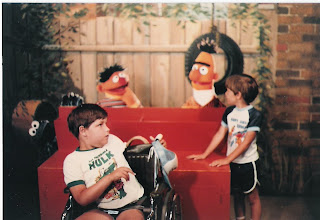 My brother, Michael, and I - at Sesame Place

Posted by Jon From Elmwood at 12:24 AM No comments: 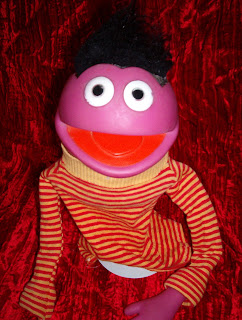 Sesame Street's Rosevelt Franklin
Posted by Jon From Elmwood at 12:27 AM No comments: 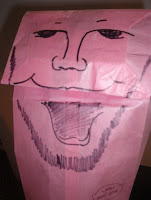 This portrait of me was made by Matt Ficaro back when I worked a Blick with him in 2005. In return I made a puppet of him. Click his name to see it!
Click the pic to see more puppets of me, if you really want to! Hahaha...

Posted by Jon From Elmwood at 12:15 AM No comments: 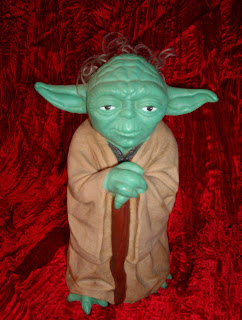 Yoda
I got Yoda way back in 1981, when The Empire Strikes Back out!
Posted by Jon From Elmwood at 2:01 AM No comments: