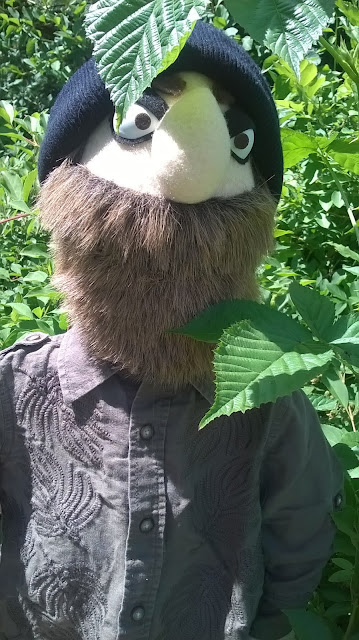 Jebediah Tooth
Mouth Puppet from "Defining Monsters"
Can't tell you much about this guy yet.
Stay tuned!
Posted by Jon Bristol at 6:00 AM No comments: 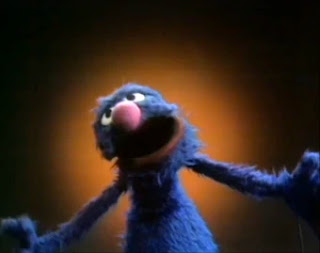 Today is my brothers 49th birthday.
In honor of that I ask everyone to support the MDA and the arts...
Make a donation to the MDA, even if it's just a buck...
Then find an independent artist/musician/film maker/etc whose work you enjoy and buy something from them.
A print, a download, a t-shirt, a movie, whatever...
And enjoy the day...  Even if you're stuck at home! 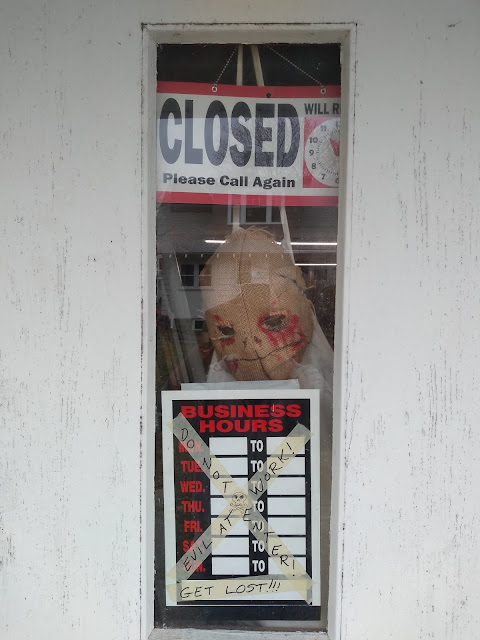 Well, not really closed.
These are "strange days indeed" but we'll persevere.
During the down time we're having the gang is still editing, writing, making puppets, and prepping for the shoot of "Bernice, Too" and a couple other projects we want to keep a mystery for now.

If you want to keep showing support for us keep checking out our videos on YouTube and subscribe to the page as well.
And feel free to rent/buy some of our series and flicks on The Elmwood Channel on VHX.
And let's not forget HEAD!
Here's a great link to all the spots for where the horror/comedy classic is available to watch
HEAD

And if you wanna make sure we stay caffeinated, buy us a coffee by clicking HERE

We're going to keep posting episodes of "The Risley Brothers"
and "Animal Behavior" every month on YouTube and Facebook, and some more surprises, including some videos from the Elmwood Vaults!

Wanna see the whole show now?
Check it out on VHX!
Posted by Jon Bristol at 6:08 PM No comments:

Staying Busy... Hope you are too! 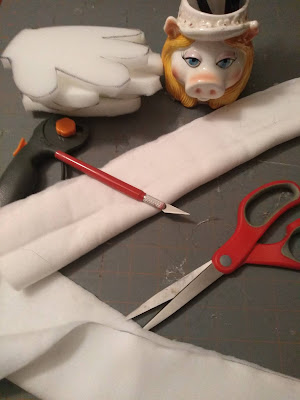 Posted by Jon Bristol at 7:49 PM No comments:

Today is World Puppetry Day!
Stay in and check out some
Elmwood Productions films and series!
Click the pics below to check it all out! 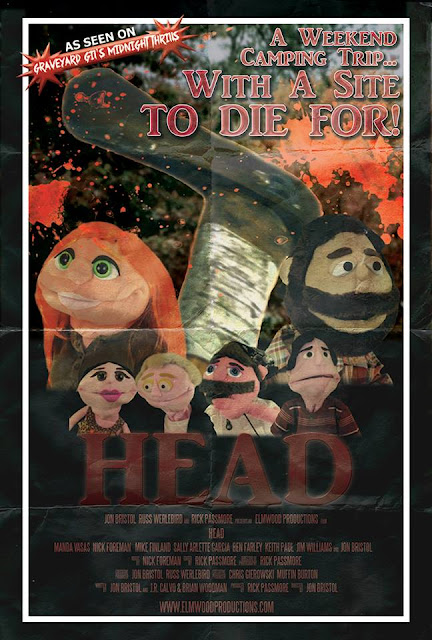 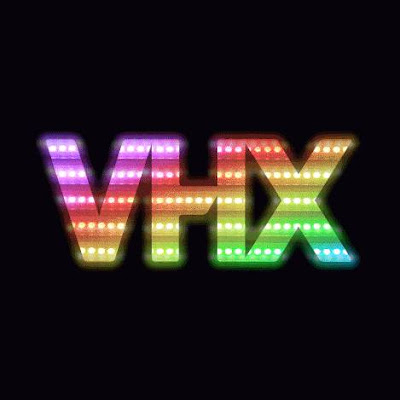 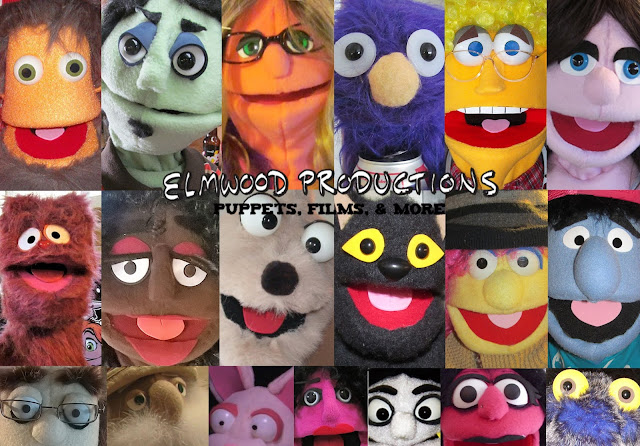 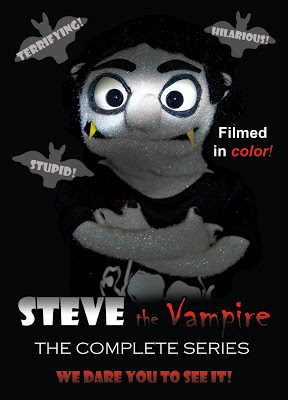 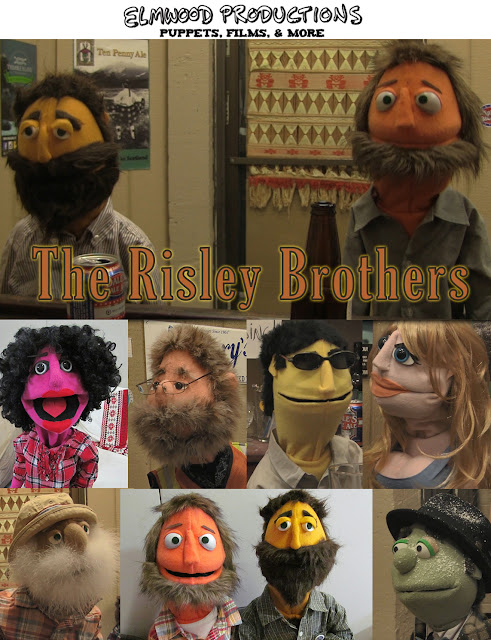 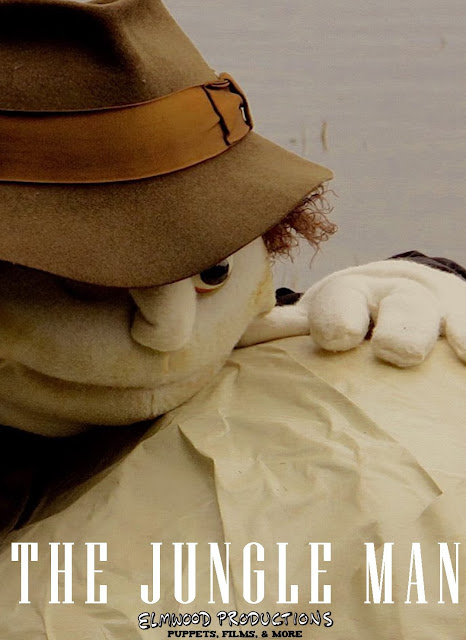 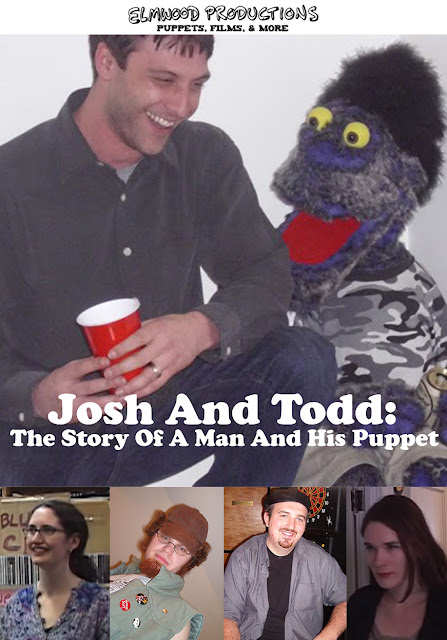 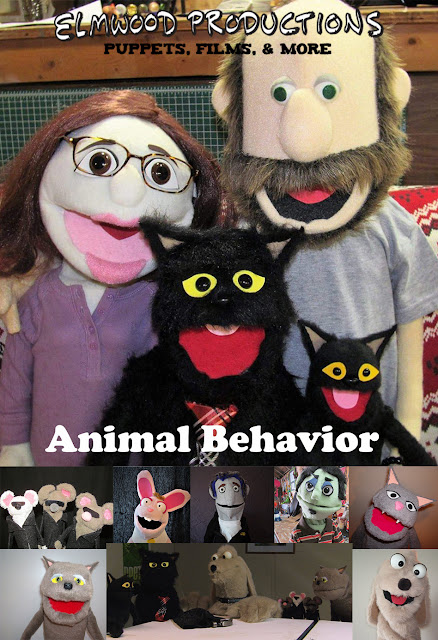 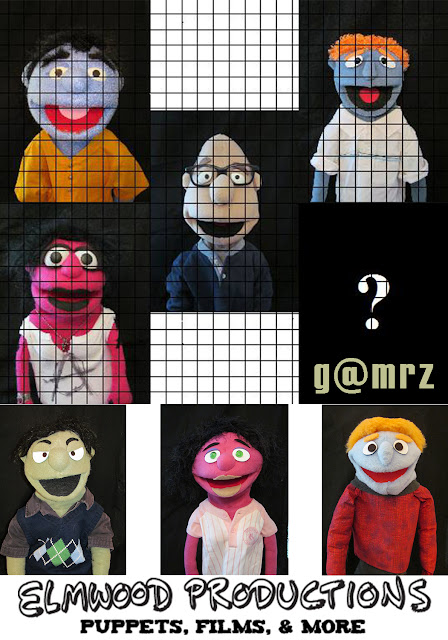 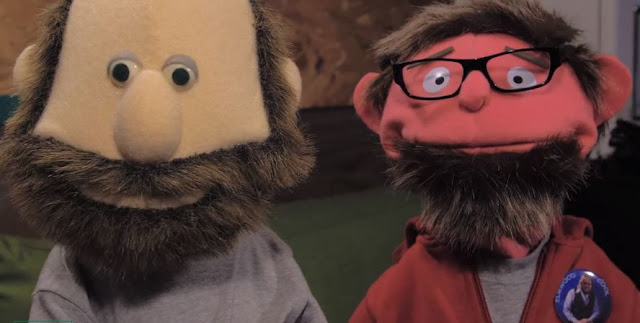 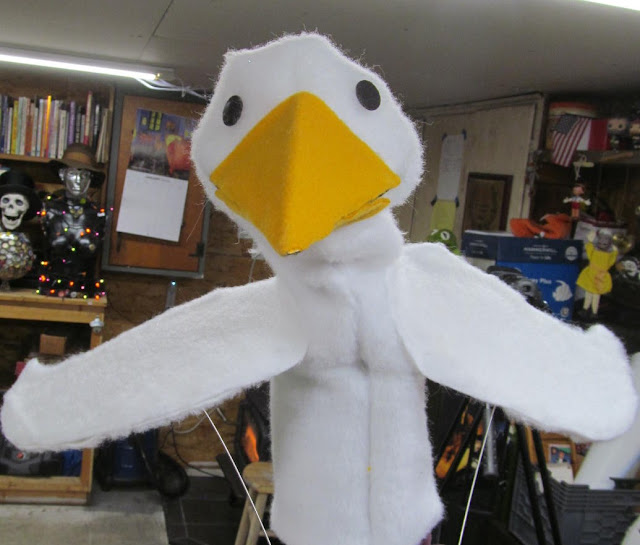 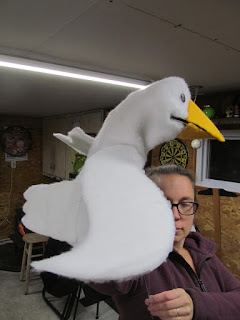 One of the quickest builds I've done, and really on a whim.
Nicki (holding the bird) needed a dove puppet real quick for a show she was doing.  In about 45 minutes this fella was done.  Not sure if it really is a dove, but it's a bird of some sort!  Hahaha!
And if you need a puppet for your project or just for fun - reach out to me via my Etsy page HERE 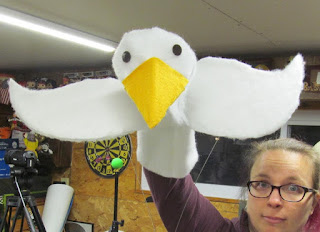 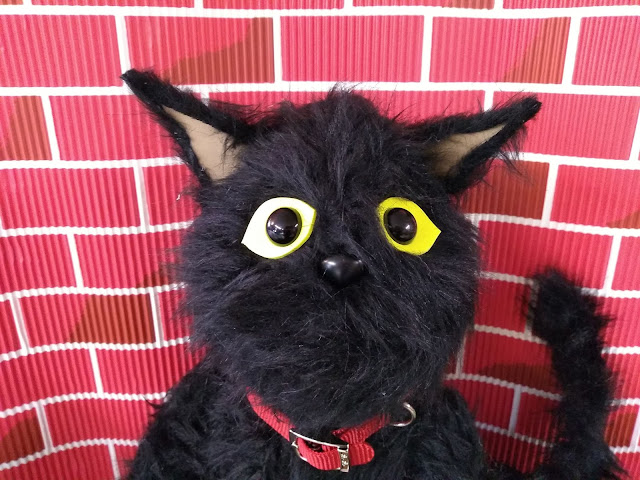 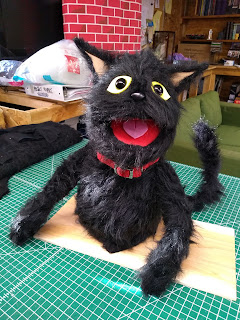 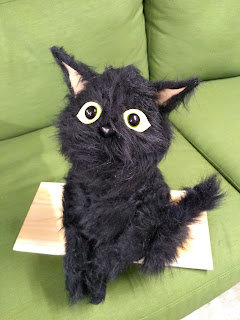 If you need a puppet for your project or just for fun - reach out to me via my Etsy page HERE
I had a ton of fun making this furry guy! 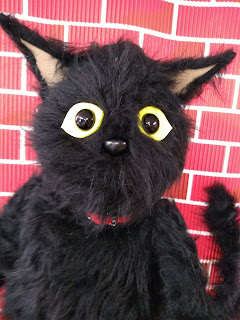 Tugger and Ripper learn the dangers of joining a gang! Or do they? www.elmwoodproductions.com
Posted by Jon Bristol at 8:55 AM No comments:

Posted by Jon Bristol at 7:50 PM No comments: 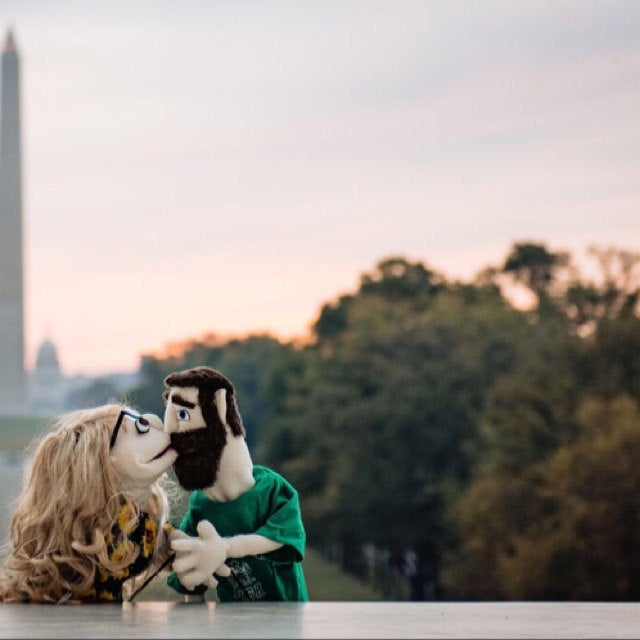 Two for one this weekend!  I made these two on a commission.  They wanted to have some fun with their engagement pictures and decided puppets would be the way to go!
I love making portraits of people (or pets!)
And if you need a puppet for your project or just for fun - reach out to me via my Etsy page HERE 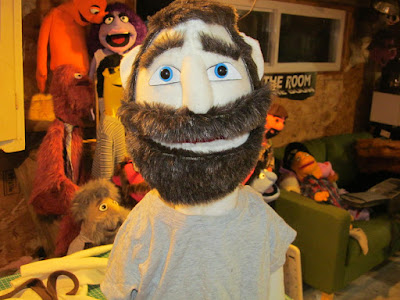 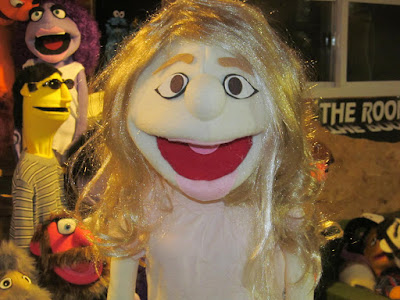 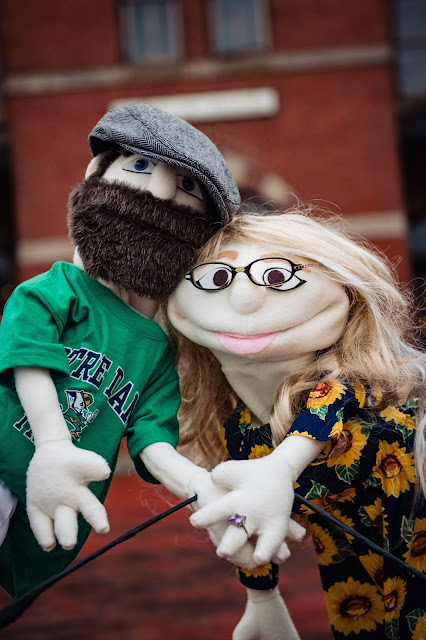 Join your favorite ghoulish TV host as he presents "The Jungle Man": A bloody bizarre short film about an odd man who lands in 1989 Elmwood via his Lunar Egg and begins to attack anyone who crosses him! Can Kerry, Billie and the rest of their friends survive this crazed creature?!

Rated R - for gore and four letter words your mom doesn't want you to say!www.elmwoodproductions.com
Posted by Jon Bristol at 7:07 PM No comments:

HEAD is turning five years old!
In March 2015 Elmwood Productions held it's premiere screenings of HEAD - A one of a kind horror film starring a cast of puppets.
Since it's release the movie has played in film festivals in six continents, won six awards, sold out DVDs and screenings and was picked up for distribution by Terror Films.
Elmwood Productions is excited to bring the film to Sea Tea Comedy Theater for this special screening. It's the first in a series of events being hosted by the upcoming You Don't Say? - Puppet Improv show that begins at the theater this spring!
Following the movie members of the cast and crew will be on hand for a Q & A session, and a puppetry demonstration.
Doors open at 6, the movie starts at 7.
More about HEAD:
HEAD is a one of a kind film starring an all puppet cast in a throwback to the slasher films of the 1970's and 1980's. A group of twenty somethings go for a nice fall weekend camping trip and end up in the middle of nightmare they may never escape from.
Rated R for all the stuff you'd expect from a horror flick, like blood, four letter words, and puppet nudity. 65 minutes long.
More about You Don't Say - Puppet Improv:
"YOU DON'T SAY!" Puppet Improv is an exciting and hilarious new LIVE game show with local celebrity guests coming to Sea Tea Improv in April 2020!
More about Sea Tea Comedy Theater:
The Sea Tea Comedy Theater is Connecticut's brand-new, coolest, most fun venue in the state. Every night is different. For a full schedule of all of our available shows, visit https://seateaimprov.com/theater
For info on classes, rentals, training, and more, visit https://seateaimprov.com
Sea Tea Comedy Theater’s mission is to present high-quality, affordable, original entertainment to a diverse audience. By providing opportunities and a home for comedians and performers, we cultivate an inclusive comedy community and springboard top regional talent to a national level.
Posted by Jon Bristol at 12:00 PM No comments: