So Kendra and Rob say the new Elmwood site is almost done... And I keep smiling cuz I know it's gonna be awesome!!!
Posted by Jon From Elmwood at 9:03 AM No comments: 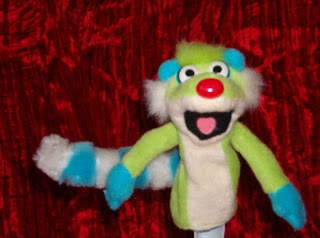 Posted by Jon From Elmwood at 3:33 AM No comments:

No one ever told me when
I was alone
They just thought I'd know better, better

So bittersweet
This tragedy
Won't ask for absolution
This melody
Inside of me
Still searches for solution
A twist of faith
A change of heart
Cures my infatuation
A broken heart
Provides the spark
For my determination
No one ever told me when
I was alone
They just thought I'd know better, better

No one ever told me when
I was alone
They just thought I'd know better, better

Guns N' Roses
Posted by Jon From Elmwood at 6:00 AM No comments: 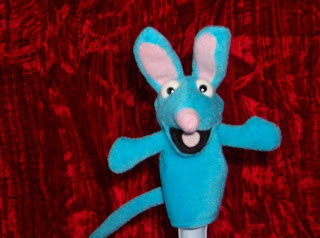 Tutter
Posted by Jon From Elmwood at 3:32 AM No comments: 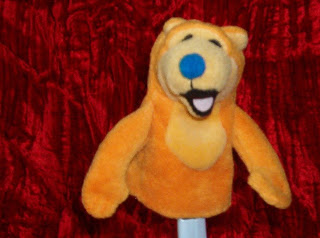 Bear
from Bear In The Big Blue House
Posted by Jon From Elmwood at 12:24 AM No comments:

Totally off the topic of puppetry for a moment... 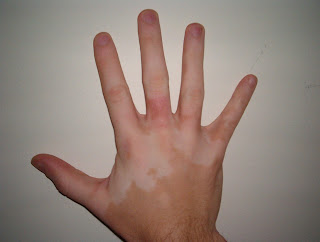 Every now and then it comes up in conversation. Usually when I see and old friend that hasn't seen me in ages or when someone new in my life gets brave enough to ask.
"What's up with your hands?"... Or something like that. Recently it's come up in a negative way, not by a friend or anything though, but enough to irk me a bit. I wrote about it on my old blog and explained it, but that blog is closed, so why not go over it again, and maybe go over it a bit more.
It's called Vitiligo.
The simple answers first.
- It's not contagious
- It doesn't hurt
- It is what made Micheal Jackson "go white"
- It's not hereditary.
- 1% of the population has vitiligo

So what is it? According to Google; "Vitiligo is a skin condition in which there is loss of pigment (color) from areas of skin, resulting in irregular white patches that feel like normal skin."

I'm losing the pigment in my skin. Slowly. In most people, like myself, it's first noticeable on the hands, feet, and face. Mostly on the hands for me at first. The skin looks like I got a bad sunburn, then it pealed off and left my skin pale and it just never tanned again. That's how it looks on most people, actually. It can happen suddenly or gradually. In my case it was very sudden. Early summer of 2005 I noticed it on my hands. For the summer it just looked like I tanned funny, and combined with the fact I did burn my hands I didn't think anything of it. Then my summer tan wore off and my hands were still lighter than my skin. Then I noticed it on my feet, and by the next summer I was diagnosed with vitiligo.
Is it treatable? Sure, but I don't want fake orange tans or skin grafts that will eventually turn back anyway...
Since I work so much with my hands a lot of people notice it, and on everyone our hands are always out there to be seen...

Normally I don't think much about it.


It's now caused spots on my neck, around my eyes, mouth, and a few other places, and my hands are whiter than ever. The past week or so it has been a bit of an issue. I've always notice people checking out my hands and so on, and not saying anything about it, but now I've been more or less victimized because of it. Being "different" than others can lead to prejudice, whether it's your religion, your sexual preference, or the most well known prejudice; your skin color. And that's me. Sure I'm a white guy getting whiter and some people (like Republicans*) may think this is great... But for lack of a better way to put it many people are freaked out by my freakyness. I won't get into the details as there are somethings I just won't get into on a blog.

I just figured if you're reading this blog you either know me or know my work and have seen the glow in the dark hands... So I'd fill ya in... I won't eat your babies in their sleep, and even though your religion may say so, I haven't made a deal with the devil... Yet.
I'm just fading away, hahaha... 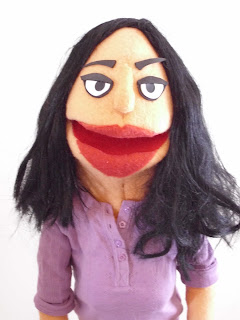 Carly
Mouth Puppet
She was previously posted, but I made some changes... Sometimes when they're done... They really arent! Now I'd say she's done!
She appears in the music video "Jade" click the pic below to check it out! 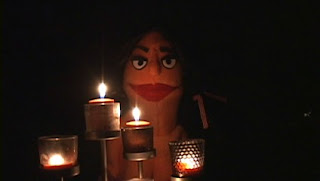 Posted by Jon From Elmwood at 12:38 AM No comments:

I had another blog (that I've closed) and on that blog I used to do a thing called "The Monday Morning Song In My Head".
I've decided to start that again here on Puppet A Day. I don't now if I'll do it every Monday, but I'm gonna try.
Yes, I am aware it's not directly puppetry related, but music is so important to what I do. When I'm writing I have music going, when I'm sketching I have music going, and when I'm making puppets I always have music going... So for me music is puppet related...

So with that little intro... Here's the Monday Song In My Head:
We'd hit the bottom
I thought it was my fault
And in a way I guess it was
I'm just now finding out
What it was all about

If you wrote me off
I'd understand it
'Cause I've been on
Some other planet
So come pick me up
I've landed...

And I opened my eyes and walked out the door
And the clouds came tumbling down
And it's bye-bye goodbye I tried
Down comes the reign of the telephone czar
It's okay to call
And I will answer for myself
Come pick me up...
I've landed.

Ben Folds
Posted by Jon From Elmwood at 6:00 AM No comments:

Andrew over at the awesome Puppetvison Blog gave
"Steve the Vampire Who Goes To a Role-playing Game"
a little love...
Thanks man!
Read his post here
And read here's a link to the previous posts about Steve on Puppetvision...
Posted by Jon From Elmwood at 1:15 AM No comments:

Strings
2004
Overview from IMDB: Strings is a mythological story about the son of a king, Hal Tara, who sets out on a journey to revenge the death of his father. To his surprise he discovers the truth of his own people - and where he expects it least - he finds true love.

OK, so that's the very short version, but to really tell more gives way too much away.
I first saw "Strings" at the 2005 Puppeteers of America National Puppetry Festival in St. Paul, and I was amazed.
I was baffled that no America studio wanted to pick this film up for distribution in the US. And then the more I thought about I realized I was foolish for thinking any studio would want it. No major stars, no explosions, and 'shutter' it's puppets whose mouths don't even move! (Smell the sarcasm)

Anyway... We've all seen marionettes, whether it's Team America, Thunderbirds, or the amazing work of Bil Baird, but never have marionettes been used in film with this much strength. The story is more than solid, and in a classic fantasy film way. It's about redemption and peace, not just for one man, but for two waring societies. Legend says the director Anders Ronnow Klarlund got the idea for making the film after 9/11, and it shows in the story and execution.
The puppets by master Bernd Ogrodnik are simply amazing. They move so fluidly and smooth. Some have seen this film and thought it was computer animation. These marionettes move in a real fashion. There is weight when they walk, there is emotion in their movements. One of the great things about the film is that the strings themselves are part of the story. The strings are there, and without them they (the characters) die. I liked this, it gave the film another depth by acknowledging that they are puppets (even if the word is never used). And the materials used in making the marionettes are natural, which is fitting for the films world.

The film is dark, as the subject matter also is. And it's also very touching. It doesn't have a Hollywood ending. And I love it.
I know this has been a vague review, I just don't want to spoil the film for ya... So go out now and buy it!

Click here for a
CNN article/video featuring Farooq Qaisar and his amazing puppets!
Posted by Jon From Elmwood at 2:47 PM No comments: 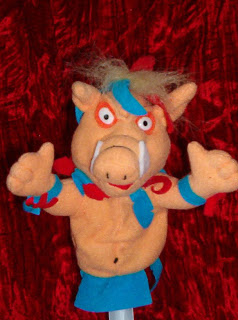 Spa'am
Finger Puppet
Posted by Jon From Elmwood at 3:07 AM No comments:

Kermit as Capt. Smolett - The Collection 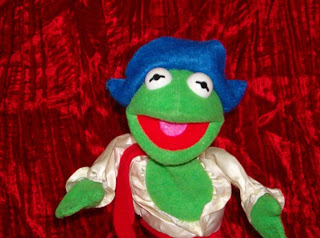 Kermit as seen in Muppet Treasure Island
Posted by Jon From Elmwood at 3:36 AM No comments: