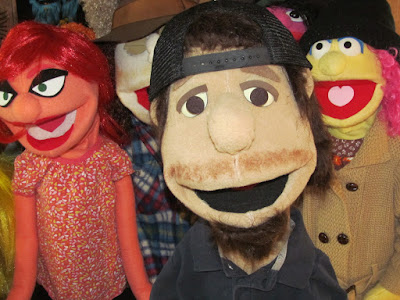 Kerry
Mouth Puppet from "The Jungle-Man" 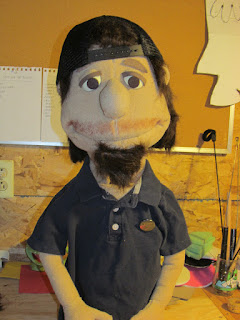 Sometimes I go back and re-use older puppets that aren't being used in anything anymore.  Often I sell them on Etsy too.
Kerry is one of the re-used puppets...
Changed up hair, eyes, facial hair from a previous character.
And he's loosely based on a buddy from middle school!
Posted by Jon Bristol at 7:00 AM No comments:

Posted by Jon Bristol at 8:38 AM No comments: 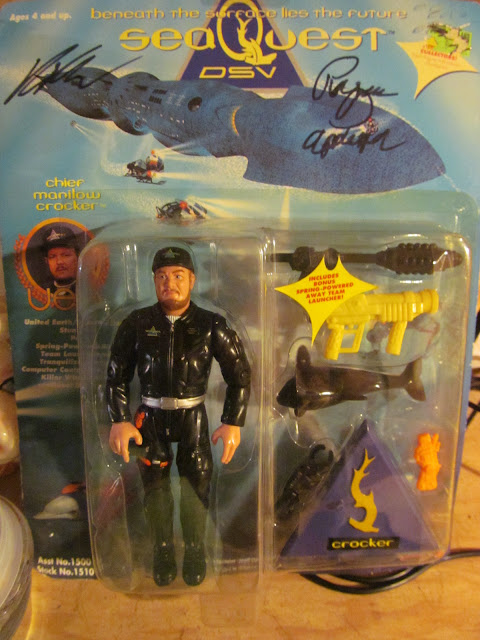 Do you have an autographed
RICKY PASSMORE
action figure?!?!
Posted by Jon Bristol at 12:00 AM No comments:

"My cats are trying to kill me." 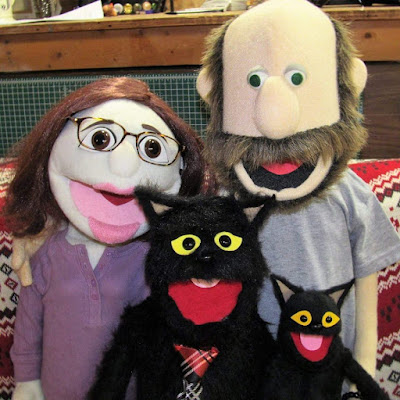 So we did this show last year called "Animal Behavior"...
We released it on New Year's Day 2018.
It's one of those projects that I feel is why Elmwood Productions came to life to make in the first place.
I feel the same way about "HEAD" and "The Risley Brothers" too.  And good ol' "Steve the Vampire".
But "Animal Behavior" is even a little more special.
Sure it's a cute and funny family friendly show.  It's exactly what I wanted to do with it.
And it took a LONG time.
The idea was simple, and fun.  I was inspired by my real life...  Kind of.
In the late part of winter 2008 my girlfriend, Brie, was over my place to hang out and one of my cats, Tugger sat on her lap.  Tug was one of the sweetest cats ever, but he did like to play rough sometimes, always purring through it though and snuggly after...   But never a mean or violent or unpredictable cat.  And here he is, on her lap.  I reach over to pet him, and I surprised him, and scared him.  So he swiped at me claws out.  Then a second later had this look on his face like; "Oh, you!  Sorry man."
And I laughed and said something to the effect of "he's trying to kill me to have you to himself" to Brie.
And the idea was born.

Over a couple nights I thought up ways Tugger and my other cat, Ripper, would try and do away with me.  Before pitching it to the whole Elmwood gang as an idea for a series I ran it by Tricky Pete.  His response not only solidified the idea, but also ended up paraphrased as a line the show:
"Your cats aren't trying to kill you.  Cats are just walking furniture."

And so I wrote it...   Tugger the Cat recruits his little kitten brother, Ripper, to dispose of their owner Jon so they can live with his girlfriend.  All because Tugger thinks he'd be better for her.
Full of jokes, and slapstick comedy.  I felt like it could be Looney Tunes meets The Muppets.
And so Elmwood agreed as a group to shoot it.
Summer 2009 we shot a good chunk of it.  But something was missing...
So after sitting on it for a long while we re-shot some of it, and finished the rest summer 2012, with some new cast members.
We did all the editing, dubbing, etc...  Even screened it a couple times in late 2013 after all the editing was wrapped up.
But, something wasn't right.
It wasn't bad.  It was fun, and the people that saw it liked it.  I just felt it needed something else.  One of the things we knew we had to do was re-dub the whole show, it was very uneven.
And we sat on it again...  Looking for the right music, and trying to figure out when to release it,

So while we were planning on re-dubbing the whole thing in the early part of 2017 I mentioned to Mike (who plays Ripper) that I'd like to re-shoot the whole thing again.
We had done it so long ago, and our crew has only gotten better.  At that moment talking to Mike I felt we could just do better than we had.  Mike was all for it,  I was suprised!  So next I brought it up to Ricky, and he was all up for it.  And Tricky.  And he was game too...
Did I feel bad about abandoning all the work we had already done?
Yes.  Totally.
The reality was though, it was sub-par.  Especially coming off "HEAD" and "The Risley Brothers".  The quality of those projects was so good that releasing something not as good just felt like a step backwards.
And forward was the way to go...

So we decided it was our summer 2017 project.
First I knew I had to make some new puppets.  A few of the puppets we used before had seen better days, hahaha...  And the three new ones I made were perfect.  And the four I had to refurbish came out awesome too.  Before we even set the new performers to the cast I knew this was going to be something special!  And second I updated some of the episode scripts.  Making them, I believe, funnier!
Then we cast the show.  Everything fell into place with that as well.
Man, I was really ready.
And Mike was ready to do it again, and Ricky was ready to direct.
This is usually where something goes wrong for Elmwood, hahaha...

But that didn't happen.  The shoot was smooth, we had a ton of fun, and when it was over no one killed anyone!!!  Hahaha!
Then the editing.  Ricky killed it there too, and the music - from Jason Finberg, was perfect!

Our family-friendly show was exactly what I pictured it could be nearly a decade ago.   So what was that missing thing before?
It was multiple things...  It was the cast we had in the end, the crew, the music...
Something about the crew making this in 2017 was special.
So much heart.  And soul.
And in the new version we didn't forget all the people who worked on the old version.  Each episode is dedicated to one of the people who didn't come back for this "final draft".  They all deserved it.  Without that other version of the show this released version would not have had a strong foundation to build upon.
In the end "Animal Behavior" is more than just a puppet show.  For me, it's also a tribute to to gang who makes these crazy films with me, to the girlfriend (now wife) that helped inspire the show, and to the two cats that kept me sane and loved all these years.

January 1st we released the show online, and so far everyone is loving it!  Or, they are lying to me, and I'm OK with that.  I love the show.
So now it's out there, online to rent or buy for download, I hope you do take a moment and give it a shot.

And thank you too...  Anyone out there who is reading this and has followed Elmwood Productions all these years!
Can't wait to show you what's next!!!

And for more "Animal Behavior"!

Posted by Jon Bristol at 1:30 AM No comments: 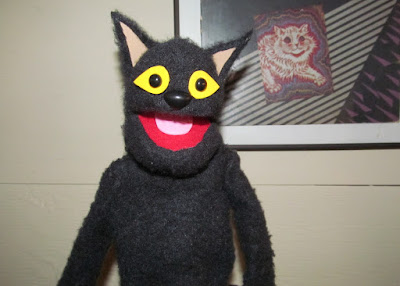 And since last week I shared a picture of the real Tugger I feel like I gotta share one of the real Ripper too!  Sadly he passed away last December, at 14 years old.  He was the ultimate cuddle monster, and sweetest cat I ever had.
So, here he is! 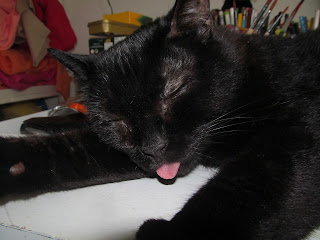 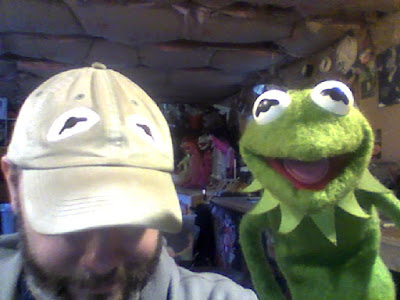 Studio is open!
Kermit and I are chilling out!
Great way to celebrate
WORLD PUPPETRY DAY!
In honor of this we have some great coupons available for you to purchase two series from The Elmwood Puppets! 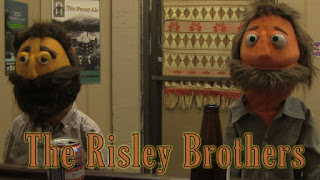 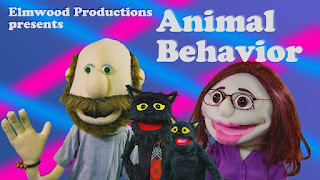 Learn more about puppets, the art of puppetry, and the artists that create it by joining
Puppeteers of America
Your Regional Guild
And UNIMA!
Posted by Jon Bristol at 10:15 AM No comments:

This week on Wednesday we get to celebrate
WORLD PUPPETRY DAY!
In honor of this we have some great coupons available for you to purchase two series from The Elmwood Puppets!

Learn more about puppets, the art of puppetry, and the artists that create it by joining
Puppeteers of America
Your Regional Guild
And UNIMA!

Posted by Jon Bristol at 9:00 AM No comments: 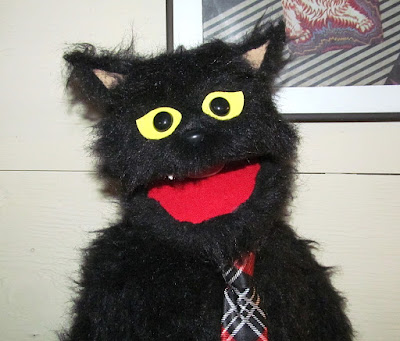 He's a new build of Tugger...
And the one used in the production of "ANIMAL BEHAVIOR"
Personally I love this puppet.  It's exactly what I wanted it to be!
And the show came out amazing...
Check it out by clicking HERE! 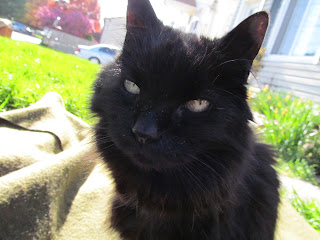 Also, a sidenote...
Most of the animals in the series were based on pets I actually had, or a friend had.
And this month would have been Tuggers 22nd birthday!
He lived just short of 18 years!  I miss the guy, but am very glad that he can live on in puppet form, and entertaining people!
Posted by Jon Bristol at 7:00 AM No comments: 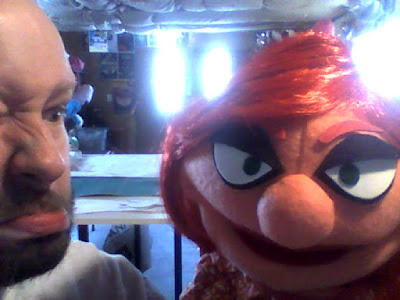 Posted by Jon Bristol at 1:01 PM No comments: 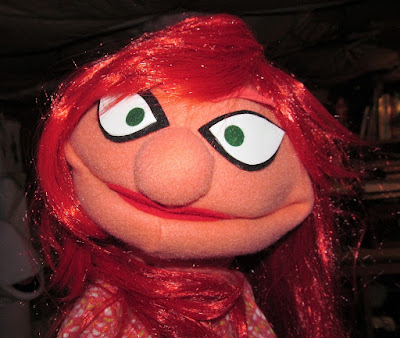 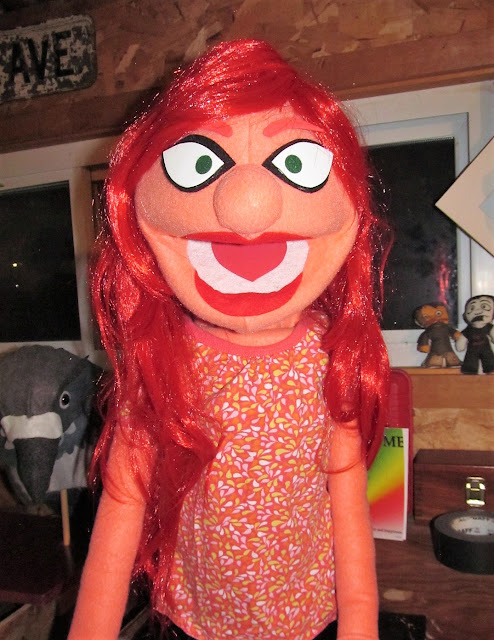 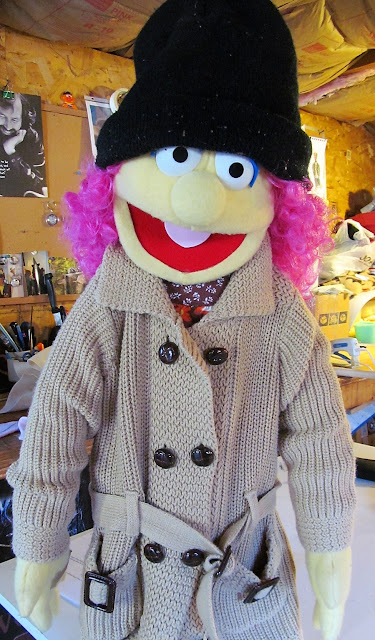 Rosa-Linda: The Lunar Lady
Mouth Puppet
from "The Jungle Man" 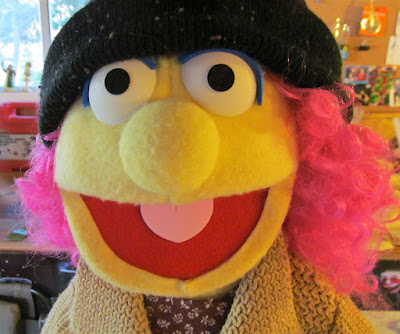 If she looks familiar to you; you're right!
She used to be "Betty"...  But now she's got a bigger purpose!
Just gonna have to wait for "The Jungle Man" short to fond out what itis!
Posted by Jon Bristol at 7:00 AM No comments: