Killed it Friday.
Owned it Saturday.
Felt at home Sunday.
I love my crews.
Elmwood and Paris.
Nuff said for now.
Posted by Jon From Elmwood at 8:53 PM No comments: 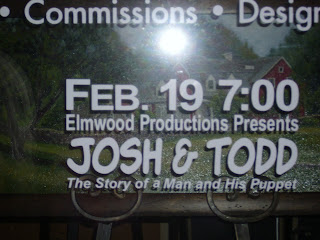 Wow.  Wow...
So the screening went over great...
A huge chunk of cast, crew, and more came out to see the preview.

And then we drank.
Ok, I'll admit, we drank even before the show!
Then  we really drank! 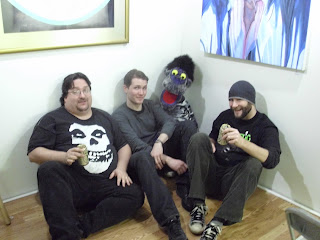 Here's Jordan, Sean, and I just before people started coming in... 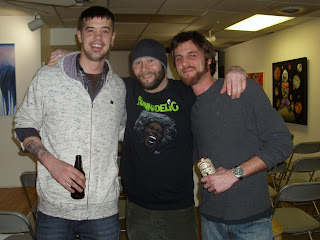 Here's Brie (I love this picture)...  She's the best.  She made a peanut butter and chocolate cheesecake to celebrate my birthday and brought it to the show! 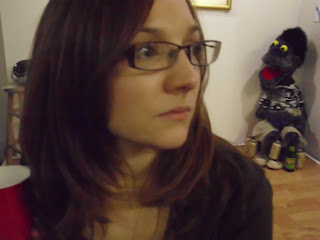 I'll be posting more pictures on Elmwood's Facebook by Monday
Posted by Jon From Elmwood at 9:31 AM No comments: 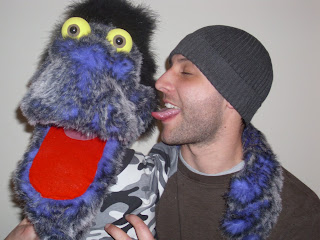 Todd and Josh
Tonite's a big deal.
Yes, tomorrow is the big premiere of the movie for the public to see...  And you better come see it!
But tonite.
Tonite...
We screen the film for the cast and crew.  It'll be the first time we all see the film together.
Eric, Jim, Russ, and I have seen several different cuts as we've gone on.  But this will be the big one.  All the cast will finally see what they worked so hard on, all our girlfriends, boyfriends, husbands, wives, parents, kids, etc, will see what we missed birthday party's and holidays for...
Russ and I started this flick in spring 2003.  We had an idea with a buddy Josh Leder.  We cast Jim and Josh in it, and we started it.
And it was bad...  So we let it sit.
Josh and Jim stuck around for the next project.  Josh faded away when he got a girl...  But we couldn't get rid of Jim (we tried!  Just kidding Jim!) and he kept wanting to go back and do "Josh and Todd".  In 2004 or 2005 we tried again, but never even got it cast...  Then in 2008 Jim and I polished up the short film into a feature length flick...  and we were filming by the fall...
Wow.  Seven years total on this flick, Hell, almost eight!  And now in a few hours we'll be watching it.  I have to admit I'm nervous.
I know it's good.  I've seen it.
But will anyone else agree?
I'll let you know tomorrow!
And thank you Eric...
For being a true friend.  And honest human.  And for saying yes to being in the flick.
Without you I really don't think it would have been this good! 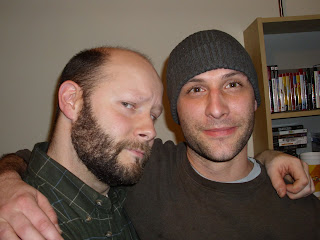 Jon and Eric
Posted by Jon From Elmwood at 7:07 AM No comments:

Monday Song - Come On Get Higher

So it's snowing.
Again.
I live in New England, Connecticut to be specific, so I hear all the time "you should be used to this".  And I am.  I'm used to snow.  It doesn't mean I have like it.
I did like it this season.  At first it was refreshing to see it and hear Jingle Bells on the radio.   Then New Years came, and then there's been a storm pretty much every week since.
And now it's just getting old.
I don't ski, my winter sports are drinking coffee and watching movies, so I have been doing a ton of that (thank you Netflix) but even that is running thin.
Anyway...  back to puppets for a second...
JOSH AND TODD: THE STORY OF A MAN AND HIS PUPPET
PREMIERE SCREENING 2/19/11
AT PARIS IN PLANTSVILLE
CLICK HERE FOR MORE DETAILS!
Posted by Jon From Elmwood at 7:34 AM No comments: