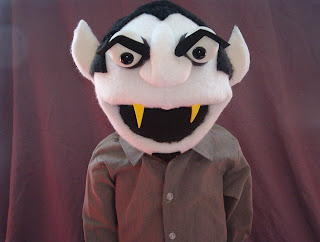 Count Dracula
from Steve The Vampire
Making vampire puppets is kinda tricky.
There have been alot of them in the past. Mostly Dracula inspired too, so it was an interesting challenge to make a Drac puppet and not have it look like the others we've seen.
Of course there's the Count Von Count from Sesame Street and Count Blah form Greg the Bunny, and I love both of those characters. So I really didn't want our Dracula to look like those. Then right after I made Drac Forgetting Sarah Marshall came out (see the movie if you haven't, and you'll understand why I mention it) so there were a ton of Dracs out there. I wanted to make sure to pay tribute to The Count and Count Blah and to Bela Lugosi too with my Drac...
And I think I did just fine!
A little bit of each and a totally original Elmwood Puppet!
Posted by Jon From Elmwood at 12:01 AM