Some puppets in progress currently in the studio.... 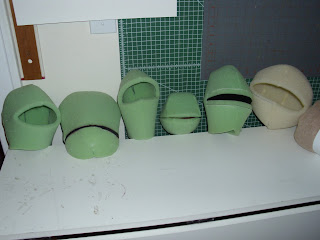 I was thinking about this this morning, and felt the need to share.
It's goofy, but fun (at least to me)

I'm not a close minded person, and am always open to new things, but with that stated there are a few things I just have no interest in, or have tried and didn't dig it, so won't do it again. Most of it is Pop Culture related...
I made a list:

TEN THINGS I'M NOT GONNA BOTHER WITH
1. McRib. I'm not getting on that train, ever. Don't tell me how great it is then 5 minutes later complain about your health.
2. Harry Potter. I tried the first book, and I got bored. I tried one of the movies, it was OK, but I don't need to see the rest.
3. Reality Television. Why would I watch these "real" yet staged events, when I can just turn off the TV get off the couch and live in reality?
4. Twilight. I'm not even going to explain it.
5. Drugs. I don't have the time to waste.
6. Sequels. I love movies, and movies that are series also. Indiana Jones, Star Wars, Mad Max, X-Men, I've seen them all... BUT if I didn't like part one do I need to see part two? No. Or if I did like part one, then go see part two and it's a stinker, I'm not going to see part three (i.e. The Matrix) no matter how many people tell me part three was better.
7. Ipad and Iphone and Blackberry, etc... I have a cell, I have a computer, I have a Ipod. Do I really need to be that connected? Nope. I love being online, I love watching videos, and so on. But I also love human contact. Sometimes ya just gotta unplug, turn off the gadgets and hang out with real live human beings.
8. The Smurfs Movie. Or for that matter any movie that takes an old cartoon/comic strip, etc and does it in computer animation or live action, or worse: a combination. Chipmunks? Dear lord, why? Yogi Bear? No, ain't seeing it. Smurfs? No thank you. If a Ren and Stimpy one ever gets made I'll buy a gun.
9. Twitter. I love the net. I have a blog, so I love sharing. But Twitter? I'm not that full of myself...
10. Cable TV. Haven't had it since 2003. Why? 400 channels and you're still watching the same movies you own on DVD, but with commercials? Or re-runs of Friends? Or the previously mentioned reality shows? Nah... I'll save my 50.00 or whatever a month and stick to Netflix!
So, now with that done... Next posting will be puppets!!!
Posted by Jon From Elmwood at 9:21 AM