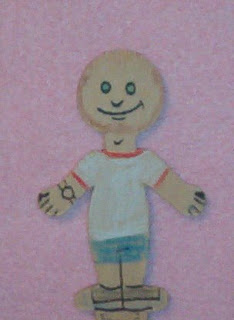 Bobby
I made this stick puppet of myself way before I decided to do the Holly Pop puppets like this.
I plan to make a portrait of myself in every form of puppetry I try.
I bought the sticks puppets at a Jo-Ann's Etc as a goof one day, I had no real plans for them, and I made this one, then the Prince one, and then just didn't do anything with the rest of the package.
Then years later the Holly Pop idea hit me, I had it in my head for a while but had no idea how to do it, a lollipop going to high school, then the idea of the stick puppets popped into my head, and I made more... Then ordered another pack from Blick (little plug there) and made even more.
They're fun, easy and goofy...
Look for almost the whole Elmwood Productions crew to pop up in stick form here, as I made them into the cast of Holly Pop!
In Holly Pop this puppet is known as Bobby Keller.
All the characters in Holly Pop are either high school students, or teachers.
All the students are named after characters from other high school films, like The Breakfast Club, or Better Off Dead, etc... That whole genere.
And all the teachers are named after teachers I had in school.
Some of the puppets are based on the Elmwood Crew and a few of our friends, others are totally out of my head.
Posted by Jon From Elmwood at 3:01 AM