For the month of May the Stick Puppets From
Holly Pop: The Lolipop Girl
take over! 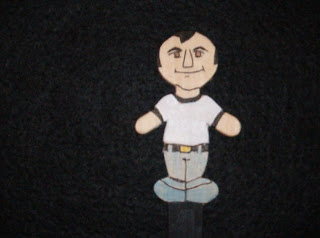 Gary Wallace
Stick Puppet from Holly Pop
All the characters in Holly Pop are either high school students, or teachers. All the students are named after characters from other high school films, like The Breakfast Club, or Better Off Dead, etc... That whole genere. And all the teachers are named after teachers I had in school. Some of the puppets are based on the Elmwood Crew and a few of our friends, others are totally out of my head.
This one is a little of a cheat, it's not from my head or someone I know, it supposed to look like Mutt Williams from Indiana Jones and the Kingdom of the Crystal Skull... 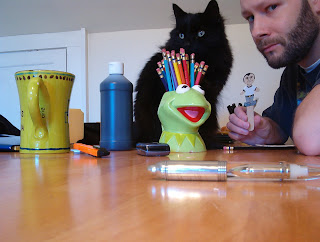 Tug and I making Mutt/Gary, Jan 2009... I had drawn him on the stick, but didn't paint the shirt or stick, one day while watching the flick, and then painted it a week later.
Posted by Jon From Elmwood at 3:01 AM