I was on Puppeteers of America's website this morning and saw in the news that there is a new Sesame Street movie in the works.  I was announced in June, and some how I missed that!  SO did PoA, so I don't feel so bad.  Let's hope this puppetry on film trend keeps rolling...  "The Muppets", "Being Elmo", and word on a new Sesame Street flick, Fraggle Rock, and Muppets 2 all happening in the next year or so is great!
Hopefully the studios and powers that be will branch away from the fantastic creations of The Muppetland and try out some new things too! 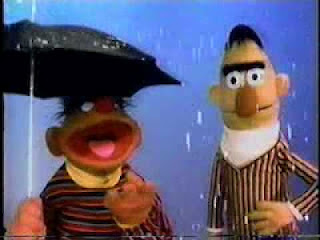 And I vote for a Bert and Ernie themed movie!
Posted by Jon From Elmwood at 10:42 AM