Puppeteer in America... Proudly Connecticut to be exact! 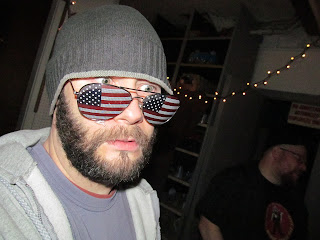 So this years National Puppetry Festival from Puppeteers of America is happening right here in good ol' Connecticut!

Five, ten years ago I would be doing backflips in excitement over this happing in my home state.
But now...  Not so much.

I want to be excited.  I want to go.
But on both counts I am not.

Before I get into my problems I want to say up front I am glad there is a Puppeteers of America (POA), and I'm glad these festivals happen...
I just feel disconnected with the mission at hand.

I've been a member of Puppeteers of America (POA) for most of the past 15 years.  As a member I get quarterly magazine, and a bi-monthly newsletter, and access to a lending library of videos and DVDs and use of a special online "Puppetry Store" of books, media, supplies, and then some...

Oh, wait...  The store is gone.  Oh look...  The lending library is gone too...  Oh man, did you see the newsletters are gone...  At least I get a great magazine four times year for the low cost of membership (sarcasm) that has the latest and greatest info on all there upcoming and emerging projects from puppeteers everywhere...
For example look at the most recent cover! 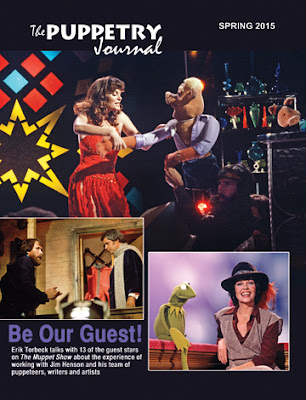 I'm so glad we have the internet in 1981 so I can share this picture with you!  Interviews with some of the Muppet Show guests!  Right on the edge of what's happening now!

OK...  Enough with the sarcasm...  In defense of the Journal, the previous issue had a fantastic cover story about a festival in Chicago that had recently happened.  And I do love reading anything I can about Henson's Muppets.
But I find myself thumbing through each issue over the past year or so feeling like it's just not for me anymore.  Maybe it's because it looks like the writers/editors are not branching out to find what's going on out here in the world, or maybe they are just too busy.  It is a non-profit after all, and maybe article just happen as they can.  I don't know what goes on behind the scenes.
And maybe my disconnect is my own fault.  Maybe I'm so into what I'm doing I'm not getting out there and seeing more puppetry.  Maybe I could be doing something to help this Journal.  Could I write an article?  Sure I could, why not?  But would it even get considered?

Seems to me, from my experience in the puppetry world (festivals, conventions, web contact, and so on) that there are very certain cliques you need to be in and brown nose to get noticed.
I know I've been noticed, having been called "fringe" and "indy" and "edgy" with the work I do and films I create.  I'm sure "trouble maker" will be added to the list after this blog post hits too... But that's what I want to do with my art.  With puppetry.  Which leads me to the upcoming festival here in Connecticut.

I was looking at the list of performances, workshops, seminars and so on...
And all but two listed (so far) are from Connecticut.  And those two started elsewhere.  One is an event with Caroll and Debbie Spinney which I'm sure will be absolutely wonderful.  Although Mr. Spinney is a Connecticut resident he got his start in Massachusetts and has made most of his career in New York.  Which in my opinion makes the event CT-centric, but not from Connecticut.  And the second is a live performance entitled "The Crane's Wife" which has been created by a current CT resident but from the description, on POA's page, looks to have been created in Colorado.

I was looking again at the events today, and there isn't even a showcase of any kind listed for UCONN's students.   The school hosting the fest isn't even showing off the fact that their students are the only students in America earning an MFA in Puppetry.  This leaves me confused.  Maybe I missed it?  Is it there on the website anywhere?

I was really excited when the festival was first announced.  And earlier this year contacted the fest about doing an event, possibly a late nite midnight movie thing screening "HEAD" and/or "Josh and Todd".  Aim it at the insomniac crowd, and the cats who like to party at the fest...  What I got in return was a semi-generic email saying to wait until submissions start for the "REEL PUPPETRY" film festival they were having and submit the films.  And I did.  And I waited...  And waited...  And waited.

- Which brings me to this side note - Now, I'm a working man, like so many artists.  And the fest offers lower prices the sooner you register.  So if you wait to register, you pay more.  And I know I am not the only one who waited to see if we made it in.   I kept watching the price of admission go up, and kept checking the site to see if anything had been announced.
Do I think they wait to announce events on purpose?
Absolutely.  And it's shameful. -

A few weeks ago I finally got two separate emails.  Both emails were "official rejections" of HEAD and Josh and Todd.  I wanted to be pissed off.  But I figured I'll wait until a week or two before the fest, see what flick they chose, then get mad if none are CT based.
Well it's seven days out from the first day of the festival starting and not a single film is list on the site.  Once a day it says "REEL PUPPETRY - FILM TBD".
Hmmm...  I have a feeling they'll be showing some of the same things that have been popping up the past few years.  Nothing new, or at least nothing with new ideas.  And nothing from outside that clique.
I hope they prove me wrong though.

And the emails they sent rejecting the flicks?  So impersonal and bland it makes me wonder if they even actually watched the flicks...
Here is one of them copied directly from my email:

Hello Filmmaker!
Unfortunately, your film Josh and TOdd: The Story of A Man and His Puppet was not selected for this year’s “Reel Puppetry: Craft on the Silver Screen” film festival, as part of the Puppeteers of Americas’ National Puppetry Festival.
There were many submissions, and all films were selected by vote through a committee of both puppeteers and filmmakers. Please don’t take this as a discouragement to keep producing films – many great films will not be shown this year for a number of reasons in the selection and programming process.
If you are attending the festival, we hope you can still come by and check out the other films we have to offer.
Sincerely,
The Reel Puppetry Film Festival

"Filmmaker" - really?  Couldn't even be bothered to type a name?  Not really what I have come to expect from Puppeteers of America.  Why do I say that?  Because in every correspondence I have had in the past with POA, including the previous festival I attended, it was much more personal and warm...
But then again why would I expect that from something happening here in Connecticut?

And really I feel bad for the films and "Filmmakers" screening in the slots at the fest.  No one knows what day they are screening, or even what films are!  I might have actually decided to go if something interested me.  Now the fest is out 400.00+ bucks and there will be one less person seeing and supporting the art.
In the end I think POA and the fest organizers just don't get what is happening out there will puppets on film.  I see so many great shorts and films, and for POA if it doesn't start with an "M" it just isn't of interest.

So what am I going to do about how I feel?  That's a great question.
As always I'll keep doing the work I do.  I do it because I love it.  And as far as POA or future festivals? I guess I could put my money where my mouth is and get more involved.  But will they even have me?  Am I cool enough to hang at the table for lunch?  Should I just stay a "rebel"?

I guess the first question I'll have to answer is: "Am I renewing my membership for 2016?  Considering I've never asked POA for anything in the past 15 years,  $60.00 for four magazines is a lot of money."  Am I becoming a grumpy old man?  Hahaha....

I do wish the best for everyone attending and performing, and it'll be great to see puppetry from all over here in CT, I'm sure! 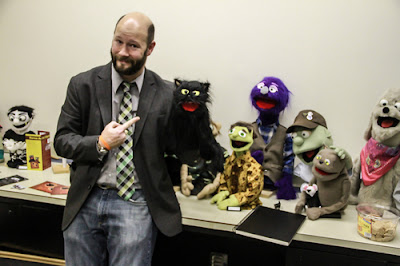 Proud American.  Proud Puppeteer
So "W.W.H.D?"  He'd remind us of the good...
The fest is good, and will bring people together.  And POA is good, it's a great place to start if you're interested in puppetry.
There are some great things here in Connecticut happening with puppetry, even if the festival organizers have chosen to overlook all the talent and insanity!
Check out The Connecticut Guild of Puppetry's page for their event calendar for listings...
And I have to thank some locals who have been brave enough to go out on a limb and screen Elmwood's flicks...  And sell out screenings too!
Paris In Plantsville, The Desultory Theatre Club, Buttonwood Tree, McLevy Hall, and Best Video , just to name a few - Thank you!  And there's just more to come!

Posted by Jon From Elmwood at 1:32 PM