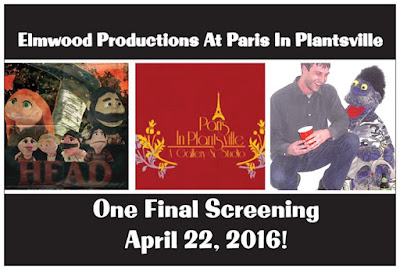 So I'm home today, doing prep for
Elmwood's last screening at Paris In Plantsville...
This work includes burning "Josh and Todd" DVDs, packing up "HEAD" DVDs, sending a few more invites, setting up a couple playlists for the pre-show and after-show music, and all the while also writing some scripts
for "The Risley Brothers"
I actually have three computers on and running all at the same time.  Hahaha...  Oh man...
Anyway this post is here as an invite to YOU!
Yes, YOU...
The big YOU.  Whoever you may be, reading this blog!
I am inviting you...  ALL OF YOU to come to Elmwood's last screening at Paris In Plantsville!

USE THIS LINK for all the info, or read below!
It may just be words, but I mean this -
I love all our fans, and I love how much support we've had over the years, and I thank you all for the support!  I look forward to see some friendly faces at the screening and some new one's too!

And here's the info you need!

As you may have read, heard, seen, and lamented over: Paris In Plantsville is ending it’s amazing 6 year run in May!
So Elmwood is coming back for one last screening just in time to wrap it up with them!
Since our first screening there Labor Day weekend 2010 we’ve been a staple of the gallery, and sold out many of our screenings. And we’re bring ing back two of the biggest for one nite only!
So if you’ve been saying:
“Hey, I really need to get out to the gallery and see the art” or "Hey, I really need to get out to see one of those flicks”
NOW IS THE TIME!
First up at 7:30 is “Josh and Todd” The Story of A Man and His Puppet” followed at 8:45 by the multi-award winning horror/comedy “HEAD - Horror The Elmwood Way”
And there will even be a few surprises too!
Following the films will be a Q & A session with members of both casts, and the film makers.

And starting at 6:00 PM we will be joined by The Hartford Flavor Company! They will be doing a tasting of some of thier amazing Wild Moon, a line of unique, flavored liqueurs made of all natural ingredients. Check them out at http://hartfordflavor.com/

Also as the doors open at 6:00 make sure to say hi to S.W. Rand and Euphio Films! Euphio will be there doing a little showing off, and selling DVDs of thier film "The Hollow Waltz"! More about EuphioFilms at  http://www.euphiofilms.com/

This night will be a great chance for local film makers, puppet-heads, and artists of all types to meet up and network before and after the flicks!

Both films are Rated R, so please leave the kids at home!

And look for some great new Elmwood events at some amazing spots later this year!
Posted by Jon Bristol at 12:15 PM