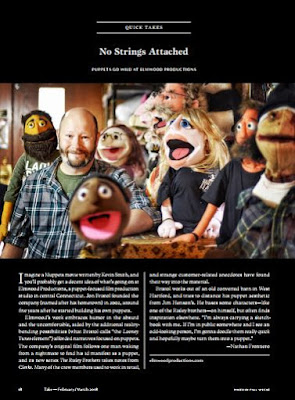 To get a better look at this picture/article CLICK HERE -And the magazine is out now!

The Take Magazine's most recent and unfortunately last issue featured a nice little piece about Elmwood Productions and myself!
It's bittersweet because it's the last issue of a magazine I really enjoy...  These things happen though, and I'm glad Elmwood got to be a part of it.
And yup, it's another piece on us that says we're in West Hartford, lol...  We're not.  Even though we do have history there.

As happy as I am with the piece I'm sad that Ricky and Mike aren't mentioned.
They were there assisting on the day of the photo shoot, and one of them is holding up the Wes puppet behind me.

Ricky Passmore and Mike Finland deserve HUGE shout outs.
Without the two of them by my side Elmwood Productions would not be where it is now.
Since the days they both came in the door they have both given me and Elmwood an huge shot of adrenaline and talent.
And the past five years would not have been nearly as successful and awesome without them.
"HEAD", "The Risley Brothers", and "Animal Behavior" are all killer because of them working with me.
Elmwood Productions is so much more than just my thing.  So much more.
So many people work hard and laugh harder to make these flicks and projects.
Thank you all for being a part of it!

And in case you don't know what Ricky and Mike look like... 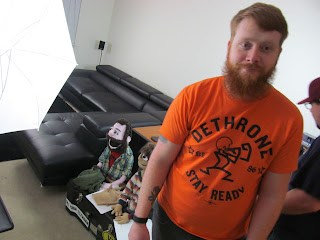 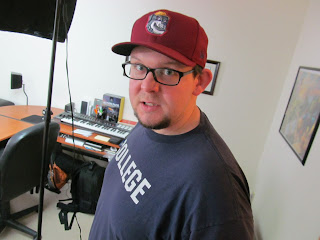