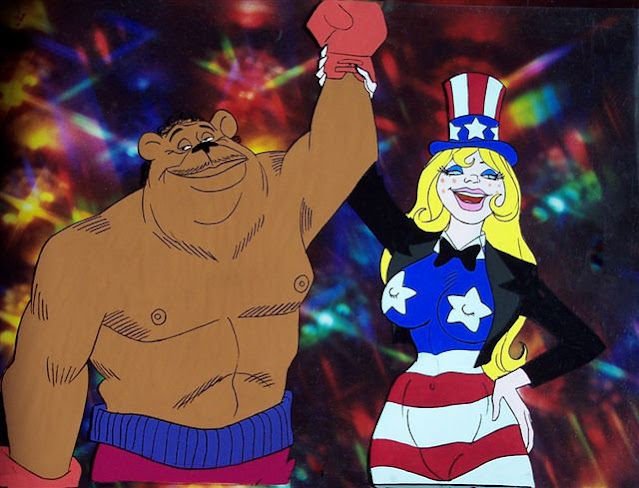 It was said to me as an insult.  Because the person who said it is so stuck in what would best be called "mainstream" arts.

And I thought: "Fuck you.  I should be lucky to be that good."

But instead I just said "Thanks" and smirked.  And I think the guy who said it was in shock a little.
Thing is, I LOVE Bakshi's films.
Not every single one, or every short or series he's done.  But I do love his work as a whole.
I would love to make a movie as powerful as "Heavy Traffic" or "Coonskin"...  Or as influential as "American Pop" or his "Wizards" flick.
I lean more towards his reality based work.  Like the mentioned films (minus "Wizards") over his fantasy work.  The storytelling is this different level.
The dialog, the recording of it.  So real, natural.  The animation and character design is always so distinct and original, and eye catching.  Even his adapted works like "Fritz The Cat", "Lord of the Rings" and "Spider-Man" all have this very personal look, this very real feel.
I want Elmwood to be that diverse, that unique.  And we work on that.  We don't just do the one genre Americans expect from puppetry (family entertainment) we are trying to do "one of each" as I say...  R-rated comedy, a horror movie, a drama, experimental flicks, family friendly stuff, and so on.
I'd love to do a straightforward action film and romantic comedy, and more.. . We're getting there.
And it's a mold Ralph Bakshi made, but with animation.

So thank you to the guy who thought he was hitting me with a witty insult: Eat shit.  Bakshi is a fucking genius.  And I thank you for comparing me to that.

And if you can...  Track down the book "Unfiltered".  A great look at his work.  I highly recommend it to all film buffs.  I think his website still has it, and I'm sure it can be tracked down used too.