Someday I'll write a history of Elmwood Productions, at least from my point of view/memory... Going all the way back to 1993
But not today.
Today I'll start in May, 2006...

Friday night I go see Mission Impossible 3 with Tricky. We hit up the big coffee chain and get cookies and coffee pre-screening. I try some weird coffee that keeps me up half the night.
The movie was awesome.
I wake up feeling sick, really really sick.
Food Poisoning.
And we're supposed to film a new short film;
"Steve the Vampire Who Lives With His Mom"

I suck it up and go to the now extinct Tricky Rock Studios. I get there first, other than Tricky, and I warn him that my stomach is out of control. Mrs. Tricky gets me a glass of water and says drink the Gatorade in the fridge, all of it. And I damn near do throughout the day.
Russ, Liz, Jim, and Jaime all arrive on set within 45 minutes and all make comments on how I look like death.
I fight my way through the shoot. In between bathroom breaks and holding Steve up I manage to pass out, hahaha...
But we got it done. In a day.
We joked around about doing more with Steve... I had no idea six years later we'd be shooting something called "Steve The Vampire's Last Stand" on a very cold weekend two weeks ago... 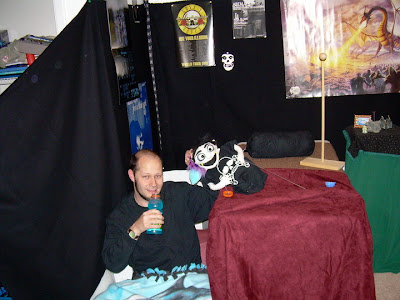 We've made 13 Steve flicks, and a couple other little goofy moments with him too...
And we're finally going to be sharing them all. In March at Paris In Plantsville, and by Halloween on DVD. And I'm excited for it.

Elmwood Productions has come so far since that day, and so far since we really got started up in 2002. I'm proud of the crew and what we have created, I can't wait to see what is next!

So to everyone who worked on Steve... THANK YOU!
And I hope to see you March 3rd!
And our buddies at PBR will be there too!!!
Posted by Jon From Elmwood at 4:26 AM