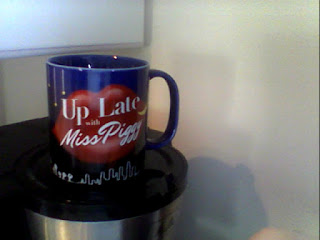 This is the only piece of official merchandise from the short lived
TV series 'The Muppets"...
Awful title for the show, since there was just a movie with the same title.  Maybe if the show picked up where that flick, and Muppets Most Wanted ended it would have lasted longer.  That said, I did like the show a lot...  And like all shows I like over the past few years -  it didn't last.
But every time this mug would appear on screen in the show I would say
"I want one!"
And I got it!