Why Does Elmwood Support The MDA? Happy Labor Day!

If you know me then you know I have unwavering support for the Muscular Dystrophy Association.
The MDA was huge for my family, and extended family of friends for my whole childhood.  Literally.

My brother Michael was born with DMD (Duchenne muscular dystrophy) and the MDA was there every step of the way.  With support, doctors, and events that help us live a "normal" life.

Because of the MDA my brother got to go to camp every year, and we all got to spend time with other families that we could relate too and make more "families" with.
Our local MDA in Connecticut threw amazing Halloween and Christmas parties, and a great summer picnic every year.  It was normalcy in an abnormal situation.
And I didn't know it any other way.  I'm four years younger than my brother, and by the time I can remember my family was already deep into the association.  And my brother was even the poster child (now they call it The Goodwill Ambassador) for the CT MDA, and he loved every minute of it.  Meeting politicians, celebrities, and so on...  He was always smiling.
And Labor Day.
From the 1950's until 2014 the MDA hosted a telethon to raise money for research and more.  In the 1960's they chose to do it on Labor Day weekend, where it happened every year until 2014.  Labor Day was a big deal for my family as I was growing up.  Every year we were there, at Channel 3 WFSB (the local affiliate in CT) and running from event to event...  And it was awesome.  As I got older and into my pre-teens and teens I got to actually help out a bit too.   The events were amazing though.  And watching all these people from all over the world give up time on a holiday weekend to help make it happen.
My brother died in 1993.  Just a few weeks after the telethon.
He was 22.  And he beat the odds.  So for me, even though there was never a cure in his lifetime, he beat the disease.  He won.  And the MDA was a huge part in why he lived so long, and with normalcy in his life.
My brother fought hard to be as normal as possible his whole life.  And for me, he was the most normal person I knew.  And he was my hero.
The following summer the local telethon producers and the local MDA branch asked to do a piece on him to air during the telethon.  My parents agreed to be interviewed.  I really didn't have a choice.  Haha...  I was told by them I had to be there for it.  So I was.
Someone at WFSB back in the day was nice enough to give us a master VHS of the piece.  Feel free to laugh at my hair.  And yes, I did have hair!

So, each year we at Elmwood try to do something for the MDA.  And this year we're hoping you'll step up and join us this year... 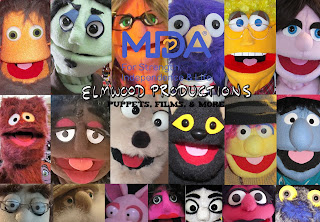 Purchase "The Bernice, Too Package" and you'll be supporting the MDA and Elmwood Productions!

For every purchase of "The Bernice, Too Package" from August 30 through September 3 Elmwood will be donating $10.00 to the Muscular Dystrophy Association!
Not only will you be supporting the MDA you'll also be supporting Elmwood make our next film; "Bernice, Too"!
You'll even get a social media shout out on Facebook and a thank you in the movie once it is completed!

All for $20.00. To buy all these separately would be $30.00!
What are you waiting for? An invite? Well, consider yourself invited!!! HERE’S THE LINK TO THE “BERNICE, TOO” PACKAGE -
https://elmwood.vhx.tv/products/the-bernice-too-package
Get caught up with Elmwood just in time for "BERNICE, TOO"! And show love and support for the MDA!
Two men. One wheelchair. And a day in their lives... The world is a wonderful and strange place. Let's spend some time in theirs.
Starring a cast of puppets, in a world of our creation. Nothing too deep. But, maybe just deep enough.
Posted by Jon Bristol at 5:00 AM