In 1996 I went to Dragon*Con in Atlanta with the hopes of breaking into the comic book industry as a writer/artist. I was more interested in puppetry, but cartooning and writing were something I felt I was pretty good at, and I love comics, so I figured I should give it a shot. Clearly after my life took a different direction and I did follow that puppet dream instead. But at that convention I was at a panel where a few of my favorite comic type people were discussing their work.

James O’Barr (creator of The Crow), Tim Bradstreet (amazing illustrator), and John Shirley (screenwriter) were discussing the work they do. At that time they were all tied to The Crow. Mr. O’Barr was the guy who wrote and drew the original comic, Mr. Shirley co-wrote the first movie based on the comic, and Mr. Bradstreet was doing cover art for the current comic, which was an adaptation of the second Crow movie.
During the panel another artist who I can’t remember made fun of yet another artist for being too much like one of his influences. And James O’Barr shut him down and said; “There’s nothing wrong with that. I think it’s important to embrace your influences.” (That's a bit paraphrased, from memory)
And that really stuck with me.
So many “artists” I know try to deny what influences them, or be so different from their influences that they embarrass themselves in the process, and I don’t understand it.
So with that in mind I’ve never shied away from admitting what influences me, as a writer, a puppeteer, and artist. So I wanted to take some time and share some of them with you…
Each picture is a link to that artist, or work/character(s), or a great fansite… And I’m sure I’m forgetting something/someone, so maybe later I’ll do another post on this theme. 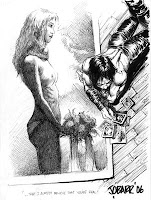 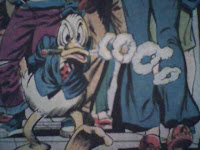