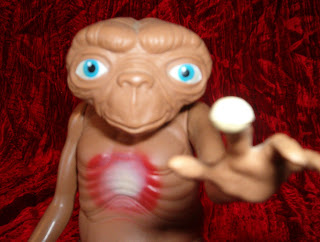 E.T.
this is a rubber hand puppet that I got for my mom... 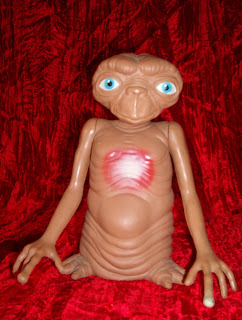 He was made as a give away when E.T. was released on VHS during the 1990's. Around that same time my mother fell very ill with both lung cancer and emphysema (don't smoke kids!) and ended up in a coma for a few weeks. Upon coming out she was intubated and couldn't speak. She had a heart monitor taped on her finger, and it would light up off and on. One day she was in and out of it and she kept holding her finger up and trying to say something. But she couldn't talk... Finally I got her a pen and paper and she scribbled "ET ouch" on it and then held up her finger again. My father and I started laughing, my mom smiled, it was cool. A day or so later I was in a video store and saw this E.T. there, and the only way to get him was to buy the video. So I did. I went to the hospital and my mom was asleep, so I put him on the table next to her before I took off. I have no idea when she woke up or went through her mind, but she loved him, and every time she went into the hospital he went with her. The night she died someone who was at my house took E.T. and put him in our front window, looking up with his finger stretched out. I thought that was really cool.