Today I'm starting something new here; reviews/commentary/thoughts of puppet related things, movies, DVDs, shows, books, events, etc...
And I'm starting with the biggest of the all: 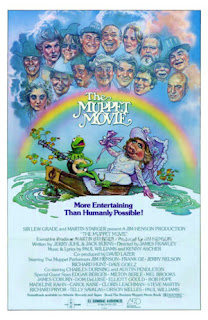 Kermit the Frog gets inspired to leave the swamp and got to Hollywood to become a star and make millions of people happy. Along the way he meets a bear, a lady pig, a whatever, and more and they all join him on his journey. Meanwhile the evil fast food chain owner Doc Hopper tries to convince Kermit to be the spokes frog for his chain of frogs legs restaurants, even if it means killing good ol' Kermit.
The Muppets have this way of being family entertainment without ever pandering to kids and making adults throw up or be bored. There are just as many jokes in this flick for the adults as there are for the kids. That's part of why the Muppets work so well. The Muppet Movie was directed by James Frawley who made his mark directing The Monkees TV show in the 1960's. That's probably the perfect training ground for a director that hadn't worked with the Muppets before. By 1979 the Muppets were household names, Sesame Street had been on for 10 years, and The Muppet Show was at it's peak. There was Muppet merchandise everywhere you turned. it was a good time to be a Muppet fan!
The movie itself is pure joy. The Muppets are fully aware they are in a movie, so much in fact the opening scene is them getting together to watch the movie they made, and some of the best jokes are simple ones like Kermit looking right at the camera to the audience and commenting on what's going on. The screenplay written by Muppet vets Jerry Juhl and Jack Burns nails every character down perfectly and shows us how they all met (approximately, according to Kermit) and made it famous. And the villain, Doc Hopper (Charles Durning) and his henchman Max (Austin Pendelton) do a fantastic job keeping up with the Muppets. Some actors just can't do that.
The movie has become famous for all the celebrity cameos and the fantastic music by Paul Williams and Kenny Ascher (ever heard of "The Rainbow Connection"? Of course you have!) tying it all together.
The puppetry is of course the best of the best. This was Jim Henson, Frank Oz, Jerry Nelson, Dave Goelz, and crew at the start of their peak and there is not a flawed performance in there.
Just before the movie peaks the Muppets are stranded in the mddle of a desert in the middle of the night. Gonzo sings a hauntly beautiful song and Kermit walks off to be alone. While alone he (literally) has a conversation with himself. First he's mad because he's failed. He's dragged all these weridos out into the middle of nowhere for nothing, and he soon realizes it wasn't for nothing. Before they were all doing nothing. Just living the day to day life. Now they all have a purpose, and Kermit realizes he has a promise to keep, to himself. The power of the scene would have gotten a human actor awards. But Kermit didn't get awards for it. But Kermit has gotten to do exactly what he's wanted since the 1950's... He's made "millions of people happy". And I'm sure that is better than any acting award.

I'm guessing by now you can tell I love this movie.
Some films from the 1970's/80's come off dated now, my review of Muppets Take Manhattan with touch on that a bit, but The Muppet Movie is rather timeless.
I saw the film two winters ago in a theater on a Saturday afternoon with Brie. The theater was packed with families, and I'm sure these kids have never seen the movie, and maybe never seen the Muppets at all before that day. And they loved it. I think that says a lot, there is this gentle madness with the Muppets that most "family" fare doesn't have anymore and these kids were just reaching out to the characters, they are real, as opposed to Nemo and Buzz after all.
I also remember the very first time I saw it in 1979, I was four years old. My father, brother, and I went to see it and it was the first time I realized people do this as a job or in life... And I knew I wanted to somehow be involved in this kind of fun.
And there is a message in the madness. be true to yourself, and your dreams. Follow them, and with some gumption and work you'll get there... And if you're lucky your friends will be there with you.
In 2009 the U.S. National Film Preservation Board chose the film for preservation in the National Film Registry of the Library of Congress. That's a pretty big deal, I bet Barney's Big Movie never does that!

To me this is the best Muppet film, and if you don't own the DVD yet; buy it! Now! Hahaha.
So on to the rating scale. From one to five stars: The Muppet Movie gets the Full Five

I have to agree with you John. This movie has it all. Funny jokes, touching dialogue, a great moral, and some of the best characters to ever grace a screen big or small.

I keep hoping that the Muppets will once again get their proper place in the sun as it saddens me to see the multitudes of crap my children have to chose from when it comes to their entertainment viewing options.

IGaelon!!!
have faith the new movie will be awesome!!!