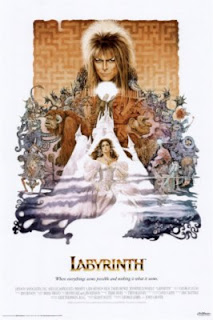 And it got me thinking about writing a review.  I've done a couple reviews here before, and feel like today would be a good day for one.  But then I realized reviews are boring.  So instead I'm just gonna write about my experiences with the movie it's self.
Growing up a huge Muppet-head I devoured everything that Jim Henson and company was involved in.  Went to see The Muppet Movie opening weekend in 1979, had Muppet shirts, dolls, records...  Everything.  Love that Frank Oz was Yoda.  And when The Dark Crystal came out begged my mom to take me.  For the record it came out in 1982.  I was seven.  And not ready for it.
But I loved it.  Every second of it.
So I bet you think I saw Labyrinth the day it came out, right?
Nope.
I missed it completely in the theaters.
1986 I was eleven years old.  Puberty was setting in, and I was a total dork.  I still had a subscription in Muppet Magazine.  And Jennifer Connelley was on the cover with the Muppets.  And I was ready to check it out.  It looked cool, and Bowie's music was a fixture in my house.  What was not to see here!

But life got in the way.  And the movie also tanked in theaters.  It was out of the big theaters and into the .99 cent theater and gone before I even knew it.
Then, like so many other people, I rented it a year later.  I remember watching it with my brother and mom the summer of 1987, on a rainy day on the couch.
I liked it.  I didn't love it.  But I liked it.
Of course the puppetry and puppets and effects were amazing.  Of course Bowie's songs were great.  Of course Jennifer Connelly was easy on my 12 year old eyes.
And as a Henson junkie I was happy to see it wasn't just more Muppets. 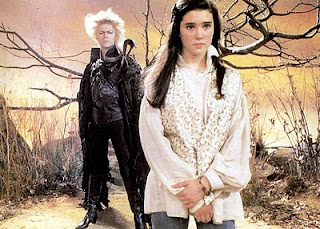 And then I went on with my life.
Six years later in the late fall of 1993 (I was 18) I decided to pick up a VHS copy of the movie, to add to my Henson collection.  I watched it that Friday night with my dad and brother.  As always my dad fell asleep, hahaha...  My brother and I got into it though.  Maybe it was nostalgia for being a kid.  Which I'm sure is how it got a cult following to start.  Maybe it was I finally got all the dirty jokes and perversion hidden in the flick.  I don't know.  But I loved it that time.
It was the last movie I watched with my brother.  He passed a week or two later.  I don't know if it's a coincidence or not, but the last move we went to see in the theater was "The Muppet Christmas Carol" in December 1992
I bought the soundtrack a few weeks later and it went into heavy rotation whenever I was drawing or writing.
Over the years it's hit DVD three times, three different versions (different extras) and I've owned two of them.  When it first came to DVD I ate it up.  Watching it every month or so.  Analyzing the set design, the Froud designed puppets, the lighting, and so on…
It wasn't Jim Henson's masterpiece (that would be The Dark Crystal) but he was onto something.  It's too bad that four years after 1986 he would be gone.
I don't watch it very often anymore, but still own it.  I think the last time I watched it was last fall, and before that maybe two years earlier.  I did find a copy of the soundtrack on vinyl last year and added it to the collection though.  The last time I did watch it I loved it still, but saw all the huge flaws.  But in the end, it's a fun movie.  And I think Jim Henson was just trying to make people have fun with art. 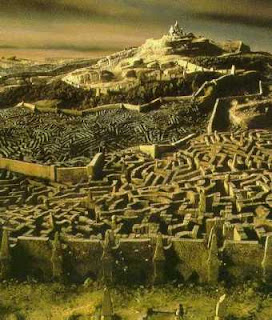