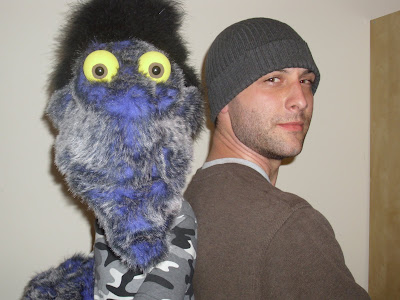 Join us February 15th at The Desultory Theatre Club in Torrington for a screening of our feature film "JOSH AND TODD: THE STORY OF A MAN AND HIS PUPPET"!

Plot Overview:
What would you do if you woke up one morning to find a monster has moved in with you? Well, this is what happens to Josh. And not only does the monster Todd move in, but he also causes complete havoc on Josh's boring life. Josh's girlfriend can't take it and leaves, his friends think he's going nuts, and all Todd want's him to do is loosen up for the first time since childhood and have some fun...

The doors open at 7:00 PM, and the movie will start at 8:00! "Josh and Todd" is 80 minutes.
The film is rated R - so you get to hear puppets and people say all those four letter words we all love, and even some puppet nudity!

It's a 5 buck donation at the door to get in!

Following the screening the filmmakers along with members of the cast will be doing a question and answer session on micro-budget filmmaking, working with monsters, and other things that went along with making this film for those interested.

http://joshandtodd.blogspot.com/
Posted by Jon From Elmwood at 3:30 AM