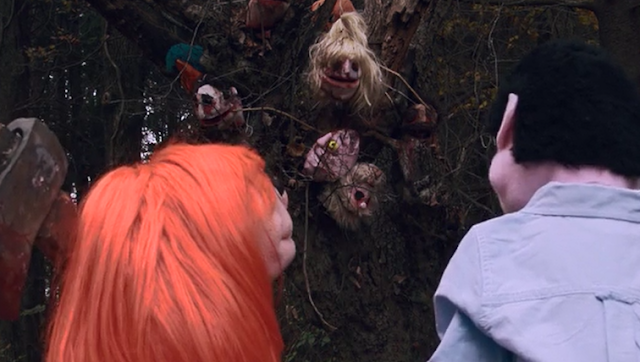 I've said it before, and here I am saying it again:
HEAD is the movie that wouldn't die.  And for a movie that had everyone betting against it it really has done something amazing.


And now here we are, coming up on five years since it's premiere screenings back in March 2015, prepping for a screening.  A special fifth anniversary screening!
BE THERE!
I can't believe we're getting to do this screening.  It's because of the fans we're here and this is happening.  THANK YOU FOR ALL THE SUPPORT!

Here's all the info about the screening!  And here's a LINK FOR MORE!

Elmwood Productions is excited to bring the film to Sea Tea Comedy Theater for this special screening. It's the first in a series of events being hosted by the upcoming You Don't Say? - Puppet Improv show that begins at the theater this spring!


More about HEAD:
HEAD is a one of a kind film starring an all puppet cast in a throwback to the slasher films of the 1970's and 1980's. A group of twenty somethings go for a nice fall weekend camping trip and end up in the middle of nightmare they may never escape from.
Rated R for all the stuff you'd expect from a horror flick, like blood, four letter words, and puppet nudity.


More about Sea Tea Comedy Theater:
The Sea Tea Comedy Theater is Connecticut's brand-new, coolest, most fun venue in the state. Every night is different. For a full schedule of all of our available shows, visit https://seateaimprov.com/theater
For info on classes, rentals, training, and more, visit https://seateaimprov.com
Sea Tea Comedy Theater’s mission is to present high-quality, affordable, original entertainment to a diverse audience. By providing opportunities and a home for comedians and performers, we cultivate an inclusive comedy community and springboard top regional talent to a national level.